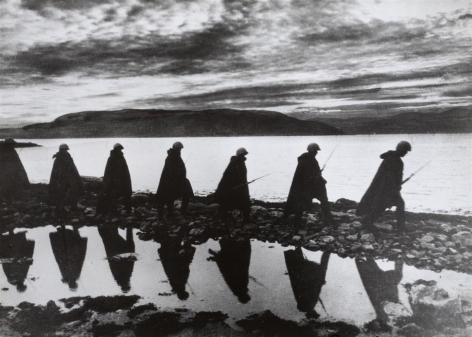 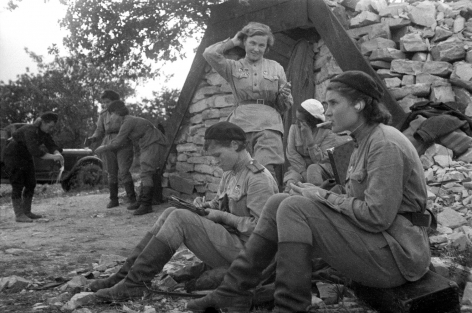 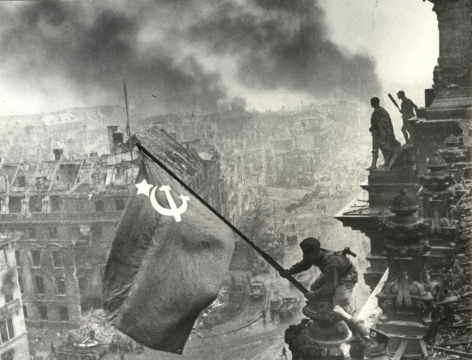 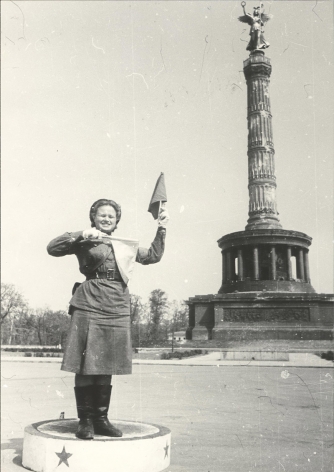 Khaldey was born to an Orthodox Jewish family in Donetsk, Ukraine only seven months before the start of the 1917 Bolshevik revolution. His life and career were beset with misfortune: when Yevgeny was one year old, his mother held him in her arms and was fatally shot. In 1941, at the start of World War II, his father and sisters were killed by Nazi forces. From a young age, he worked a number of challenging jobs to support himself, and made his first camera from a cardboard box and his deceased grandmother’s glasses.

Khaldey’s photographic career began serendipitously at age 16 while working at a factory. Khaldey saved money by selling half of his daily 800 gram rations to buy a Fotokor-1 camera, and took photographs of the factory on his spare time. His supervisor noticed Khaldey’s photographs and invited him to publish in the factory’s periodical. Over the following few years, Khaldey would go on assignment taking photographs of the collective farms in the Donetsk region in western Ukraine, work at the Stalinskii Rabochii newspaper, and submit his photographs to the Soyuzfoto photographic agency, that collaborated with the decade’s most prominent photojournalists including Boris Ignatovich, and Arkady Shaikhet.

In 1936 Khaldey moved to Moscow and began a serious career in photojournalism. His first major assignment was in 1937 for the TASS agency, that commissioned a photo-story celebrating the 15th anniversary of the founding of the Yakutia Republic in Siberia. On this trip, he would travel further north, and accompany a team of arctic explorers.

At the outbreak of World War II, Khaldey dedicated himself to documenting the front lines and would cover the full 1,481 days of combat between between Russia and Germany. His photographs include scenes from Murmansk in northern Russia, and Berlin on the day that Hitler’s death was announced. It was in Berlin that Khaldey took his most iconic photograph "Soviet Flag over the Reichstag," of a Soviet flag being unfurled from a window of an apartment. Khaldey staged the photograph himself, using a tablecloth with a hammer and sickle sewn on by a Berlin tailor. Following the war, Khaldey captured the Potsdam conference and the war trials in Nuremberg. Many of his photographs were published in his 1979 photo-album From Murmansk to Berlin, about Russia’s involvement in World War II.

Despite Khaldey’s success as a photographer, he was dismissed from TASS in 1948 for being Jewish. In an exchange with the TASS editor, he wrote “I am one of the leading photo correspondents for TASS, and I cannot find work. Please help me,” to which the editor responded, “When I head to work along Gorkii street, I see plenty of photo studios that make portraits of Soviet people. Why not inquire there?” Khaldey spent two years without work before finally landing a position at Klub, a state sponsored political and lifestyle magazine. He would later take official portraits and photographs for the magazine Soviet Culture and for the newspaper Pravda. In 1972 he was dismissed from the newspaper staff, once again on account of his religion. He died in 1997 at age 80.