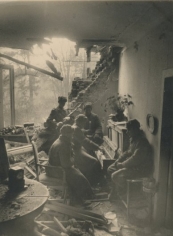 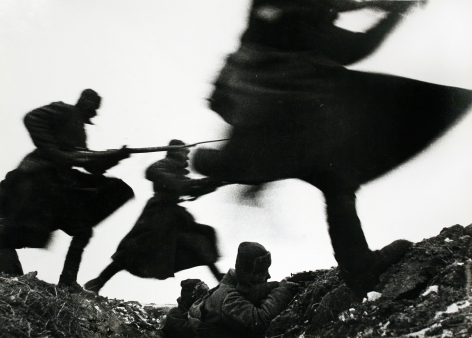 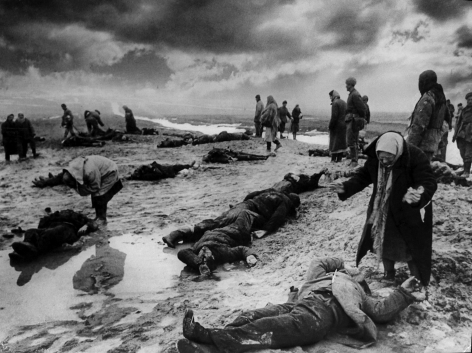 Dmitri Baltermants (1912-1990) was born in Warsaw, Poland, which at that time was part of the Russian Empire. His father, Grigory Stolovitski, was an officer in the Imperial Russian Army, while his mother came from a family of Polish intellectuals. Dmitri’s parents divorced when he was three years old. Shortly after the divorce, his mother married a lawyer, Nikolai Baltermants, who adopted Dmitri and gave him the Baltermants name.

World War I claimed the life of Dmitri’s father and drove the Baltermants family out of Poland to Moscow (1915). Dmitri spent his childhood amidst civic dissolution, revolution, civil war, and a drastic reorganization of state, property and society. He lived with his mother, who was fluent in several European languages and worked as a typist, in a cramped communal apartment. After leaving secondary school, Dmitri had odd jobs, including rendering architectural drawings, working as a cinema mechanic, and being an apprentice printer at the Izvestia Printing House, where he developed interest in photography. The printing house sent him to study mathematics at the Moscow State University. After the graduation in1939 Dmitri was assigned to teach mathematics at the Military Academy, where he received a rank of captain. A few months later, Izvestia (the Communist Party newspaper) sent him to Western Ukraine to cover the Soviet invasion of Poland, although no photographic material survived, Baltermants’ future was determined, it was the beginning of a long career in photojournalism.

During World War II, Baltermants covered major battles (including the one in Stalingrad) for Izvestia and for the Red Army newspaper Na Razgrom Vraga. He fought and photographed in Ukraine, Poland, and Germany, reaching Berlin in 1945. He was wounded twice. Many of his most famous images (like Attack, Grief, On the Roads of War) were published only after the war (in the 1960s). Nevertheless, Baltermants emerged from the war with the reputation as one of the brilliant young war photographers. He started working for Ogonyok, a popular illustrated magazine, and through his work the Baltermants name became quite well known. He traveled across the Soviet Union as well as abroad. He photographed Mao Tsetung during Khrushchev’s visit to China and Fidel Castro when he traveled to Cuba (and the United States) with Brezhnev. During the course of his career, Baltermants photographed every Soviet leader from Stalin to Gorbachev.

Baltermants considered himself an expert in staged photography, he enjoyed ‘playing with negatives,’ adding details to photographs from other stills (e.g. "Grief," in which threatening, black clouds in the background were superimposed from another negative). His perfect compositions, expert use of color gained him praise from both the authorities and Soviet public. His first personal exhibition abroad was in London in 1964 (the same year he became Ogonyok’s picture editor) and in New York in 1965. As his prestige in the world of photography grew over the years, he served as the president of the photography department at the Society of Friendship with Foreign Nations and represented the Soviet Union at various international photo events.

In June 1990, Baltermants became ill from a kidney infection and died a week later. He was the subject of a commemorative exhibition at International Center of Photography in New York in 1992.