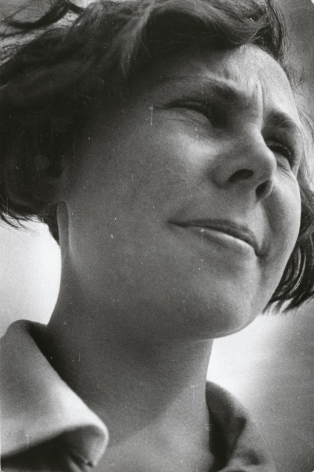 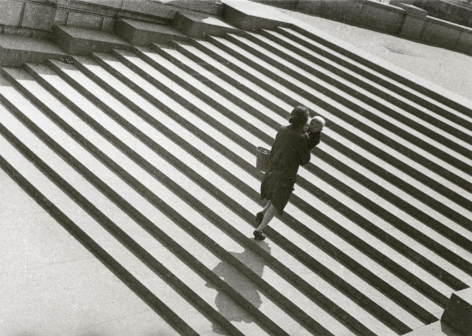 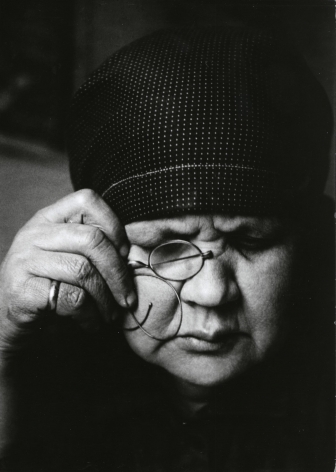 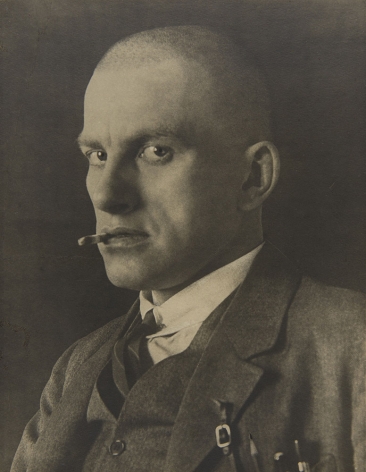 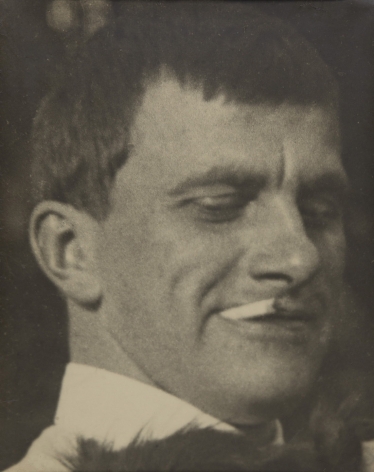 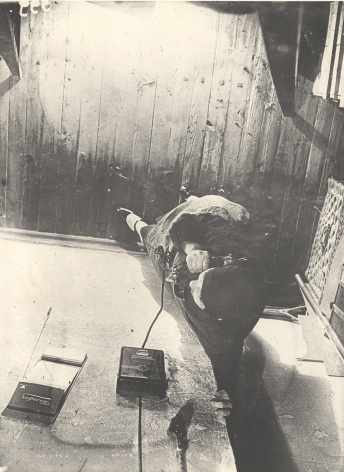 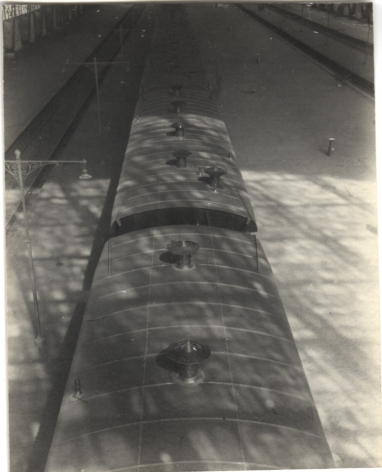 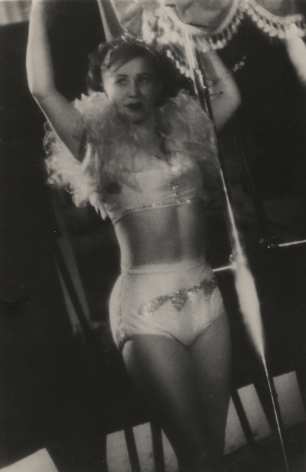 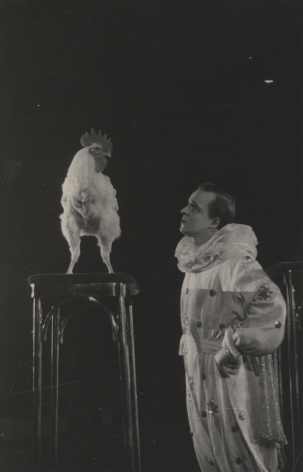 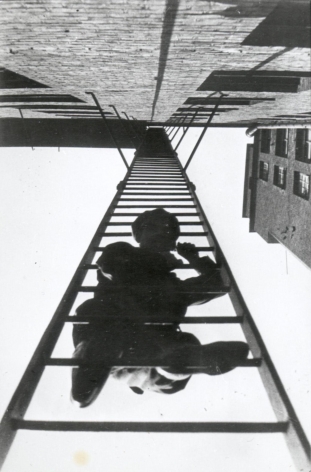 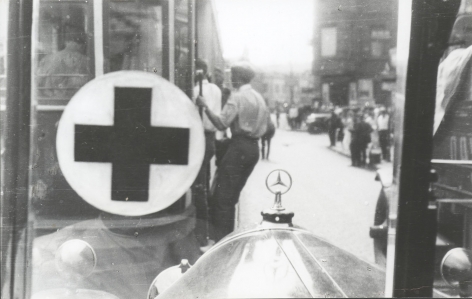 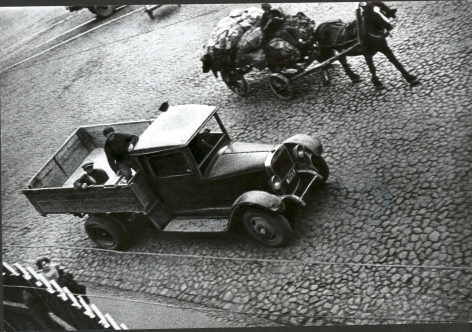 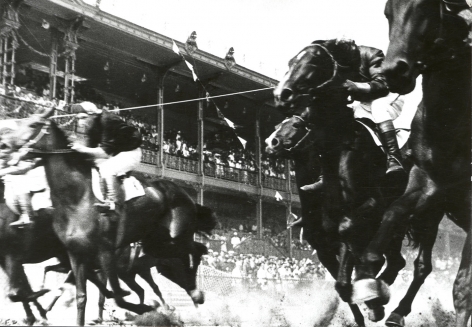 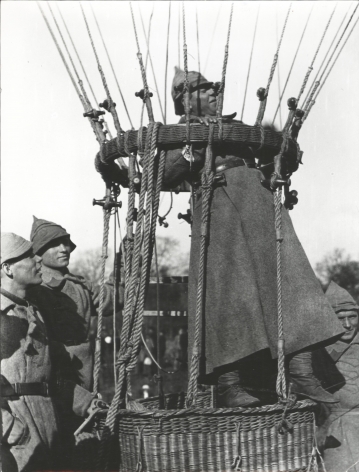 The history of Russian Constructivism is profoundly indebted to the contributions by the artist and theorist Alexander Rodchenko (1891-1956). Especially prolific in the 1920s following the Russian Revolution, Rodchenko was deeply convicted in unifying aesthetics, politics and everyday life. He worked across media — creating advertisements with a bold formalist visual language, photographs reflecting the artist’s novel philosophical approach to perception, and politically-charged theater design for Moscow’s most radical theater director, Vsevolod Meyerhold.

Alexander Rodchenko was born in 1891 in Saint Petersburg. At the age of 14, he and his family moved to Kazan where he enrolled in the Kazan art school. Here, he met the artist Varvara Stepanova, who he would marry and work with for the rest of his life. In 1914, the couple moved to Moscow where Rodchenko enrolled in the Graphic Section of the Stroganov School of Applied Arts. In the following half decade, Rodchenko’s aesthetic practice would evolve quickly; while he counts among his earliest sources of inspiration the art nouveau theatrical drawings of Mir Iskusstva (World of Art), by 1915, Rodchenko had earned a spot in Moscow’s Futurist circles. In 1916, he exhibited his artworks at the Futurist exhibition Magazin (store) in Moscow, organized by Vladimir Tatlin. Over the following few years, Rodchenko became greatly influenced by the Suprematist artworks of Kazimir Malevich who rejected figurative representation through his groundbreaking paintings of flat planes of color, such as Black Square. In 1918, Rodchenko created a Malevich-inspired series of Non-Objective Paintings depicting rounded forms on canvas that conveyed feelings of dynamism, movement, and flight. His Non-Objective Paintings series would also pave the way for his future contributions to the field of Constructivism.

The discussions at INKHUK (the Institute of Artistic Culture) in 1920 that included Varvara Stepanova, Vladimir Tatlin, El Lissitzky, Liubov Popova, Vladimir Shterenberg, among others, would serve as a catalyst for Rodchenko’s serious devotion to Constructivism. INKhUK artists and theorists worked to reach consensus on Constructivism’s defining characteristics, and how best to apply them to the art and culture of a nascent Soviet society. While the artworks from this period aesthetically resemble the non-objective paintings of Malevich, they are socially grounded and the artists believed that their work would inspire in their audience a Bolshevik world view. In the fall of 1920, Rodchenko began teaching Constructivist principles through courses in “Construction” and “Graphic Construction of a Plane,” at the VHUTEMAS (Higher state artistic and technical studios) in Moscow. During his time at the school, Rodchenko would turn away from his abstract non-objective work and begin exploring the fields of collage and photography.

In 1923, Rodchenko teamed up with the period’s most experimental Constructivist theorists, artists and designers to establish the magazine Left Front of Arts (LEF). Through articles, artworks, and poems, the contributors explored the ways that the arts could express Bolshevik ideas through formalist principles and promote a new Socialist culture. Rodchenko designed the covers, initially through the medium of photomontage, and in later years, through photography. One of Rodchenko’s most successful projects that appeared in LEF was a 1923 photo collage that he specifically designed to accompany the text of Vladimir Mayakovsky’s poem “Pro Eto” (About This). Mayakovsky wrote the poem to his muse and lover, Lily Brik. For the project, Rodchenko pasted a portrait of Lily Brik looking straight at the camera with piercing eyes, over the blue, gouache title. Other pages combine snapshots of the two lovers alongside often surprising or humorous juxtapositions: accompanying the line “and again / the walls of the burning steppe / ring and sign in the ear with the two step,” Rodchenko pasted Lily Brik’s face amid images of Western decadence such as a foxtrotting couple, whisky and cigars.

“Pro Eto” was one of many collaborations between Mayakovsky and Rodchenko on graphic work, who would be especially prolific in the field of advertising. In 1923, Mosselprom, the state advertising agency, hired the duo to create posters promoting state-sponsored household objects like table oil and bread. In each of these posters, the slogan was produced by Mayakovsky and the collage work by Rodchenko. Their collaboration even extended into the realm of bookmaking: around 1924, Rodchenko created a series of portraits of Mayakovsky and incorporated them into a collage for the back cover of Mayakovsky’s book A Conversation with a Tax Collector About Poetry. In the collage, it appears as if Mayakovsky’s head has transformed into the Earth, and airplanes whimsically fly around him.

Rodchenko’s 1924 portraits of Mayakovsky, and of others such as the theorist Osip Brik, and Varvara Stepanova, were instrumental for his future experimentation in the realm of photography. These were his very first single frame photographs. Through photography, Rodchenko adapted his formalist art training for the field of journalism. In 1925, within a year of his first portraits, Rodchenko had been hired as a photojournalist for the Soviet Union’s most prominent photography magazines and newspapers, among them Ogonyek, Ekran Rabochei Gazety, and Tridsta’ Dnei. While primarily preoccupied with photography, Rodchenko continued to innovate the field of graphic design, most notably through such artworks as the 1924 film poster for Kino Glaz and the 1925 poster for Battleship Potemkin.

The event punctuating 1925 for Alexander Rodchenko was his four-month trip to Paris. Rodchenko, along with David Shterenberg, Konstantin Mel’nikov, among others, participated in Paris’s Exposition Internationale des Arts Décoratifs et Industriels Modernes, an exhibition with pavilions showing artworks by international artists and that featured architecture, graphic design and advertising. Rodchenko contributed a model for a workers’ club — consisting of a communal table, book stand, lighting and posters – that demonstrated an efficient use of space, and the ideals of organization and productivity. During his trip to Paris, Rodchenko also acquired a light-weight 35 mm Sept camera that allowed him to take photographs from a range of angles and perspectives, and that would be crucial in defining his aesthetic philosophy. Despite these successes Rodchenko expressed his profound skepticism of Parisian life and culture in his nearly daily letters he wrote to Varvara Stepanova. Some of these letters were published in the publication New Left Front of Arts (Novye LEF), that ran from 1927-1928, and for which Rodchenko often wrote.

Upon returning from Paris and equipped with his lightweight 35 mm camera, Rodchenko began to earnestly experiment with perspectives, angles and the camera’s role in redefining perception. In his 1925 photoshoot, “The Building on Miasnitskaia Street,” Rodchenko photographed his apartment building from both a birds-eye and worms-eye view. Rodchenko’s article “The Direction of Contemporary Photography,” for the August 1928 issue of Novye LEF, explains the philosophy behind his aesthetic practice. He wrote that “In order to teach man to see from all viewpoints, it is necessary to photograph ordinary, well-known objects, from completely unexpected viewpoints and in unexpected positions, and photograph new objects from various viewpoints, thereby giving a full impression of the object . . . We don’t see what we are looking at. We don’t see marvelous perspectives — foreshortening and the positioning of objects.” (Rodchenko, Experiments for the Future, pp. 211-12.) Rodchenko believed that his unusual manner of capturing the world could also reveal insights about the structures that govern reality and stimulate social awareness. His photographs on Miasnitskaia Street would be published in the magazine Sovetskoe Kino the following year.

Rodchenko’s participation in the 1928 exhibition Ten Years of Soviet Photography reflects his innovative approach to the field of photography. Photographs were entered on a competitive basis and the juried categories were art photography, documentary photography, and a science and technology section. Rodchenko submitted six photographs, including "Mother" and "The Coutryard of Vhutemas Seen From Above" — but in the photojournalism category. The decision reflected his "Constructivist stance that rejected artistic, pictorialist photography in favor of a technological, utilitarian medium” (Wolf, “The Context of Early Soviet Photojournalism,” 8). The photograph was poorly received by critics, who disparaged Rodchenko’s subjective presence in the photograph. Rodchenko nonetheless was awarded a prize for inventing a new genre, “technical photography” — a blend between documentary and art photography.

In the same year, Alfred H. Barr Jr., who would become the future founding director of the Museum of Modern Art, visited Moscow as part of a modernist tour of Europe. Deeply interested in Russian Constructivism, Barr paid a visit to Rodchenko and his wife Varvara Stepanova. In a fall 1928 article for the publication Transition, Barr wrote about the LEF members including Rodchenko, “their spirit is rational, materialistic; their program aggressively utilitarian. They despise the word aesthetic and shun the bohemian implications of the word “artistic.” For them, theoretically, romantic individualism is abhorrent.” Barr would return to the United States, with an impressive number of artworks by Rodchenko and his wife, that would enter into MoMA’s future permanent collection, and help solidify their legacies in the history of international modernism.

After Barr’s visit, Rodchenko further asserted his position as one of the leaders of avant-garde photography when he became the director of the October group’s photography division. Its members included Boris Ignatovich (who later assumed the role of director), B. Bogdan, L. Bat’, A Shishkin, Abram Shterenberg, Elizar Langman, G. Yossa, L. Smirnov among others. The group shared the goal of improving the quality of photojournalism and of promoting experimentation in photography.  Rodchenko continued to serve as director until his 1932 expulsion; the Party disbanded the organization entirely within the next few months amid their efforts to eliminate independent art organizations.

Within the next decade, Rodchenko had fallen from favor of party officials — though he continued to produce photographs and graphic design for a variety of publications, most notably USSR in Construction. Published internationally and translated into English, French, and German, USSR in Construction featured design by Rodchenko, El Lissitzky and Varvara Stepanova. Rodchenko collaborated with his wife on many of the magazine’s issues, such as a 1935 issue about Kazakhstan and parachuting, a 1936 issue about timber imports, a 1938 issue about the Moscow-Volga Kanal and a 1940 issue about Mayakovsky.

While briefly evacuated in 1941 due to World War II, Rodchenko and his family safely returned to Moscow in September of 1942. He would continue to work on graphic design, photography, and theater sets until his death in 1956. 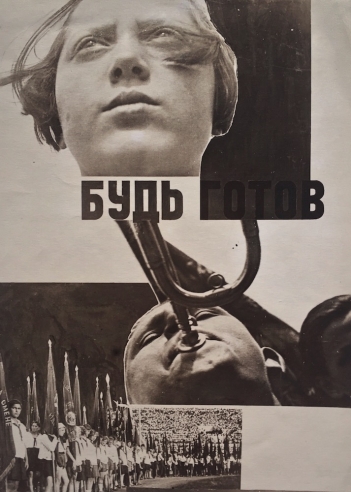 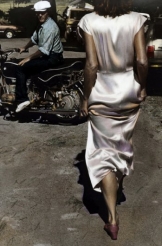 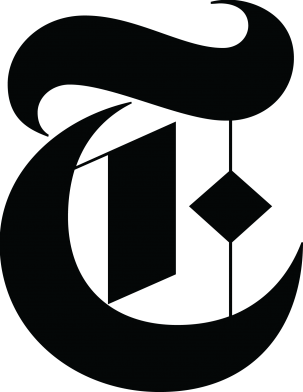