Born in 1946 in the Kemerovo region of Russia, Nikolai Bakharev was orphaned at a young age and worked as a young man as a locksmith at Novokuznetsk ironworks, spending his days in the factory and his nights honing his skills as a photographer. When he began taking photographs of nude people on public beaches in the 1980s, the circulation of photographs containing nudity was forbidden in Russia. In the early 1990s, he began shooting indoors, posing his clients in shoots lasting as long as six hours. As Karen Rosenberg wrote in her review of a 2013 exhibition of Bakharev’s work for the New York Times, “Although they date from the age before social media, Mr. Bakarev’s photographs tap into our current anxieties about portrait photography: Which images are private and which public, and who really owns them?”

Bakharev’s work can be found in public and private collections throughout the US, Europe, and Russia. In 2011, he was included in the group show “Ostalgia” at the New Museum in New York, and in 2013, he was included in the Russian pavilion at the Venice Biennale. In 2015, Bakharev was a nominee for the Deutsche Börse Photography Prize. 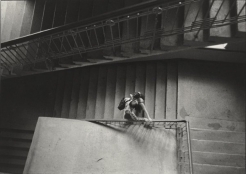