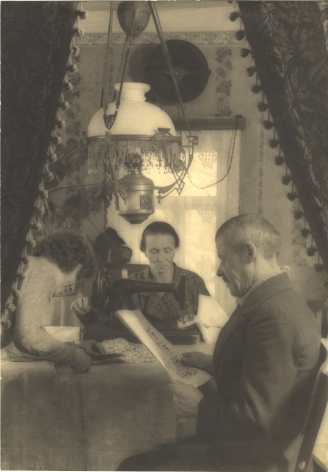 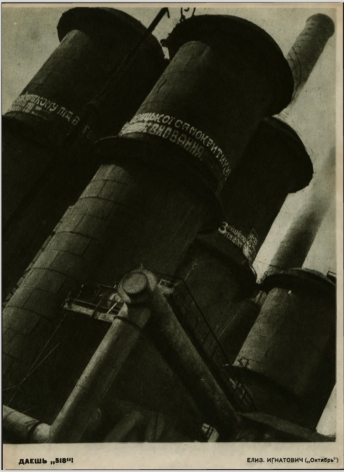 Elizaveta Ignatovich (1903-1983) was born in Moscow, and was a well-regarded photographer and photojournalist of the 1920s through 1940s. In 1929, Elizaveta joined the experimental October organization with such artists as Alexander Rodchenko, Elizar Langman, Dmitry Debabov, and her husband Boris Ignatovich. After October disbanded, she joined the Ignatovich Brigade along with her husband; her sister-in-law, Olga; Elizar Langman; J. Brodsky and L. Bach.

Elizaveta participated in many photographic exhibitions in the 1930s both in the Soviet Union and abroad including the seminal 1937 exhibition, First all-Union Exhibition of Soviet Photographic Art. While a prolific photographer of her day, Elizaveta’s photographs are now distinguished for their rarity. Among her photographs are Family of Kolkhoz Farmer, Portrait of Pioneer Leader Galina Pogrebniak, The Worker Tatiana Surina, and At the Kokhoz’s 10 Year Anniversary. By 1940, having gained a reputation as a veteran of documentary art photography, Sovetskoe Foto (1940, no. 3, "Zhenshchiny-fotoreportery") wrote on Elizaveta:

She is captivated by the fast-paced developments and the colorfulness of our lives, and she knows how to present it in a new fashion with the eyes of an artist. Her work is opposed to posturing and artificiality; as well as to the flashiness in formalist scholasticism.

Overall, E. Ignatovich tends to analyze every component of the scene before taking the shot. For this reason, she is attracted to creating monumental work and to constructing the scene. And E. Ignatovich truly succeeds in creating these scenes. A rich characterization of her subjects and an artistic integrity distinguish her work.

The writer for Sovetskoe Foto underscores Ignatovich’s ability to breath life into her subjects by manifesting their histories and personalities on film. In Family of Kolzhoz Farmer, Ignatovich creates an elaborate scene framed compositionally by tasseled curtains. Occupied by their tasks, Ignatovich’s subjects reveal their dynamic as a tight-knit Soviet family, and suggest their own personalities and concerns.

Later in her career, Ignatovich worked creating commercial photographic albums and post cards for the art publishing house Izogiz and the art journal Iskusstvo. In 1956, she received a silver medal and diploma at the Fifth International Salon of Art Photography (see Power of Pictures, 2015, p. 223) in Paris.

In 2015, E. Ignatovich’s artwork was included in the acclaimed exhibition The Power of Pictures: Early Soviet Photography, Early Soviet Film at the Jewish Museum in New York.