In Baltermants’ first professional photo, Stalin and his inner circle are seen enjoying an air show at the Tushino airfield. Lavrenti Beria (1899-1953) is on the right of the photo, in the pince-nez glasses. As head of internal security and Minister of the Interior, Beria, after 1938, curtailed the Stalinist purges of the 1930s. After directing the Soviet atomic effort in the postwar years, Beria himself was executed in 1953. Georgi Malenkov (1902-1988) standing next to Beria, was a close associate of Stalin and served as the Deputy Premier of the Soviet Union, the top member of the Secretariat after Stalin. Upon Stalin’s death in 1953, Malenkov was appointed as Soviet Premier and head of the Secretariat. By 1955, due to his ineffectiveness, he was replaced in both posts by Nikita Khrushchev. In 1957, after taking part in the attempt to oust Khrushchev, Malenkov was expelled from the party and spent the rest of his life as manager of a hydroelectric plant in Kazakhstan.

By the end of November 1941 the Germans had already suffered 250,000 casualties in Russia. In December the Russians began their counterattack. When first published, Baltermants’ photo of charging soldiers was criticized as it depicted “half-a-man,” and was thus inconsistent with socialist realist standards. It has since become one of the most enduring war photos ever taken.

"Grief" (variation)
From the series "This Is How It Was"
Kerch, January 1942
Gelatin silver print
Printed in 1960s
Dmitri Baltermants stamp and Ogonyok stamps on verso
6 x 8 3/8 inches

On July 4, 1943, almost 6,000 German and Russian tanks clashed near Kursk for the greatest tank battle in history. The Russians claimed victory in the last German offensive. The “backward” Soviets, and specifically their T-34 tanks, had defeated German technology.

By late 1944 the Red Army had repelled the Germans from Soviet soil. The Soviets took the offensive, driving the Germans across Poland in a final push toward Berlin and German surrender, a goal they attained within six months. The crossing of the Oder, the major river on the way to Berlin, was as symbolic as the American photo of U.S. soldiers planting the flag on Iwo Jima.

Trofim Lysenko (1898-1976) was the leading Soviet biologist of the Stalinist period, who led a movement against Western genetics, arguing that socialism would be the driving force behind superior plant species. His theories stood at the forefront of Soviet science until late 1950s when many of Lysenko’s theories were discredited and orthodox genetics restored.

Robeson (1898-1976), a graduate of Rutgers University, was an internationally renowned American bass-baritone singer and actor. His leftist politics made him a pariah in the United States, especially in the age of McCarthyism. He was warmly embraced in the Soviet Union, and in 1953 received the Stalin Peace Prize at the Teresa Hotel in Harlem for promoting peace between the United States and the Soviet Union.

One day after Stalin had died of a cerebral hemorrhage, the announcement of his death was made across the Soviet Union. This photo, a composite of three negatives, captures the reaction in a Moscow factory. Across the nation, workers and citizens halted their activities, listening in grief to the news that their great leader had left them.

The Kukryniksy (Кукрыниксы) were three caricaturists in the USSR with a recognizable style.
Kukryniksy was a collective name derived from the combined names of three caricaturists Mikhail Kupriyanov, Porfiri Krylov and Nikolai Sokolov who had met at VKhUTEMAS, a Moscow art school, in the early 1920s. The three began drawing caricatures under the joint signature in 1924. They became nationally famous in the 1930s after the rise of fascism, drawing for Krokodil, the Moscow satirical paper. They received international recognition for their attacks on Hitler, Mussolini, and Franco. During WW II they established the TASS Windows for political cartoons and posters. They also illustrated a number of books, including Ilf and Petrov's. The Kukrynuksy are also authors of socialist realist style paintings, they were awarded the honorary title of People's Artist of the USSR (1958).

In Soviet Union with death of Stalin in 1953, the policy regarding Kashmir was changed. During 1954 Nehru exploited the joining of Pakistan’s SEATO & CENTO. In December 1955 Soviet leader Khrushchev visited India and traveled to Srinagar and said that Kashmir is one of the States of India. Three months later in March 1956 Nehru told parliament that a plebiscite in Kashmir was “beside the point” and emphasized legality of Kashmir, which he said, was rectified by Jammu & Kashmir Constituent assembly in 1954. In February 1957 Soviet Union exercised its first veto on Kashmir, which became a regular feature of Soviet Policy.a

Following Khrushchev’s 1959 trip to the United States, where he saw field after field of maturing corn, his enthusiasm for the virgin land project grew. His dilemma: he would have to continue with the project in areas too dry to grow corn, or he would have to abandon the unsuccessful venture. Either way, his reputation would suffer.

Sergei Mikhalkov (1913-2009) was a prominent Soviet poet and playwright, who wrote the lyrics for the nation’s anthem on three different occasions, spanning almost 60 years. Apart from the national anthem, Mikhalkov produced a great number of satirical plays and provided scripts for several Soviet comedies. He also successfully revived a long derelict genre of satirical fable. He was awarded three Stalin Prizes (1941, 1942, 1950) and numerous other awards. He also served as the head of the Union of Soviet Writers. His son Nikita is now a prominent filmmaker, who won the Academy Award in 1995 for the best foreign film “Burnt by the Sun”.

"Lenin for All Men," 1961
Gelatin silver print
9 x 11 1/2 inches
Baltermants photo and 'Ogonyok' stamps and signed in Russian on verso

While the United States was racked by turmoil over civil rights in the late 1950s and early 1960s, the Soviets wanted to show the world that they were a classless society, open to peoples of all races from around the world. This message is displayed in this photograph of an African student visiting Moscow. As with all propaganda, the truth was somewhat distorted; the Soviet Union had its own minority groups, which it often held in low esteem.

"Worker and Kolkhoz Woman" is a 24.5 meter (78 feet) high sculpture made of stainless steel by Vera Mukhina for the 1937 World’s Fair in Paris, and subsequently moved to Moscow. The worker holds aloft a hammer and the kolkhoz woman a sickle to form the hammer and sickle symbol. In cinema,"Worker and Kolkhoz Woman" was chosen to serve as the logo for the Mosfilm studio.

Nailya Alexander Gallery is pleased to present Dmitri Baltermants: Photographs 1940s-1960s, an exhibition encompassing the photographer’s iconic WWII images and his work from the last years of Stalin’s glory and the era of Khrushchev’s politics. The show of some thirty vintage prints will run from 5 May through 30 July 2010, at our new location in the Fuller Building, 41 E 57th Street, Suite 704.

We are especially pleased to present this exhibition in commemoration of the 65th anniversary of the end of WWII in Europe this May. During the war, Dmitri Baltermants (1912-1990), who taught himself photography, worked for Izvestia (the Communist Party newspaper) among other journals, covering battlefields in Ukraine, Poland and Germany, reaching Berlin in 1945. His photographs chronicle war as a universal tragedy. Grief (1942), one of his most iconic war images, documents the aftermath of a Nazi massacre in the Crimean village of Kerch, by showing grieving village women as they search for the bodies of their loved ones. Baltermants spent a long time working on images from this ferocious event, which were only displayed for the first time in the 1960s. We are exhibiting three of the photographer’s interpretations of the harrowing scene. While in Germany, Baltermants took another memorable photograph Tchaikovsky (1945), in which he captured a moment of calm and beauty in the midst of destruction: a group of Russian soldiers, gathered in a shattered room of a ruined house around a miraculously unharmed piano, listening to a soldier playing.

After the war Baltermants worked for Ogonyok, a popular illustrated magazine. It was the beginning of Cold War when anti-foreign agitation was visible throughout all spheres of life, particularly in science and culture. Baltermants made a historic picture of leading Soviet biologist Lysenko attacking Western genetic research in 1948. And in 1949 he photographed internationally renowned American bass-baritone singer and actor, Paul Robeson (1898-1976), who was warmly embraced in the Soviet Union for his civil rights and peace movement but persecuted in the US for his leftist politics, especially in the age of McCarthyism. Robeson received the Stalin Peace Prize in 1953. Every Soviet citizen remembered March 6th of the same year, the day when Stalin’s death was announced. Baltermants created the photograph "The Announcement of Stalin’s Death" out of three negatives in order to depict the grieving workers at the Dynamo Factory. We are also exhibiting a rare color print of Stalin on his death bier.

Being a Kremlin photographer, Baltermants made a favorable portrait of the Party’s next First Secretary, Nikita Khrushchev, at his dacha in the summer of 1955. Shortly after consolidating his power, the ebullient and dynamic politician was a stark contrast to the dangerous Stalin. Khrushchev is probably remembered as a most colorful Soviet leader, known for his dramatic, boorish gestures and unreasonable policies including his unshakable belief that Communism would triumph over capitalism. One of the spotlight images from this period is of Khrushchev holding a piece of corn at a meeting promoting his campaign to grow corn in the American fashion. After a visit to Iowa in 1959 where he saw field after field of maturing corn, his enthusiasm grew for innovation, which eventually undermined his reputation.

In 1964, with another change of power (Khrushchev was forced to retire), Baltermants became a member of Ogonyok’s editorial board and its main picture editor. The same year he had his first personal exhibition in London and the following year in New York. He became an accomplished artist, an expert in staged photography and a master of socialist realist art. 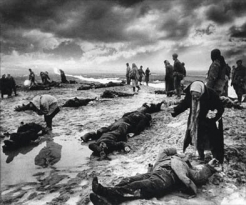